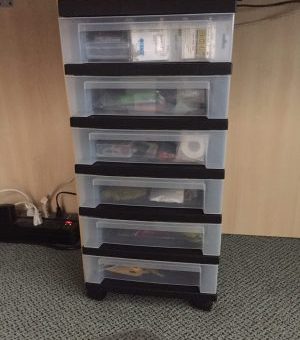 This year I was determined to get back to tying my own flies for Puget Sound fishing – for both searun cutthroat trout and Coho salmon.

In particular, I wanted to expand beyond variations of Clouser minnows. And that meant buying more tying materials, including feathers and hairs from various animals; synthetics; more threads and eyes; and flash.

It became clear early on that using a single drawer of my file cabinet wasn’t going to work.

I had an Oasis Lazy Susan caddy for my threads, bobbins, and scissors so I was covered there. 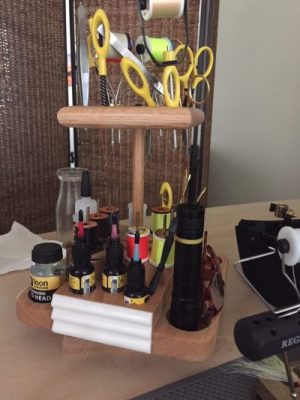 But it was organizing the various naturals and synthetics that was going to be a problem. It’s critical when one doesn’t have a dedicated tying room or area to have organized storage; having things scattered on tables or the floor won’t work – particularly when one has dogs that are intrigued by smells of animal fur or hair.

In my case, half of my corner desk is for my computer and home office functions; the other half is my tying area demarcated by my Hareline Mega Tying Mat.

I recalled seeing various plastic drawers at Office Depot and a visit there led me to the six-drawer cabinet I purchased.

The six drawers allowed me to get things organized with a drawer for hooks and eyes; one for flash material, one for synthetic body material; one for various animal hairs, one just to store the bucktails; and one drawer for miscellaneous odds and ends.

And the organization seems to work for the first few flies I’ve tied. I’m guessing if I got motivated to try tying steelhead flies I could use the existing storage I have.

But it’s clear if I was tying for trout in the Yakima River or the streams of the Rockies, fly tying could include dry flies, nymphs, and streamers, and I’m not sure I have enough storage for that. And that doesn’t include the time needed to tie the various insect imitations on much smaller hooks.

So I think I’ll just tie flies for local waters and buy flies as needed for everywhere else.

This site uses Akismet to reduce spam. Learn how your comment data is processed.